Earlier this year, Lana Del Rey performed live at the Lollapalooza in Santiago, Chile. Although I was not able to attend this performance, the internet is such a wonderful, convenient place that is was very easy to find a full concert video. I’ve never seen a full live concert of hers; let’s just say I had a few qualms with this one. She seems to be very uncomfortable in a live setting. Whether it’s nerves, or just not having great stage presence, Lana’s performances are always a hit or miss for me. From seeing the entirety of this concert, Lana Del Rey seems like she’s not a great live performer, but she flourishes creatively as a writer/artist in a studio setting.

The first thing I noticed in this concert was the song she started with, 13 Beaches. It seemed like she was off to a rocky start. Her higher notes just kept falling flat and completely straight toned. She was barely moving around on the 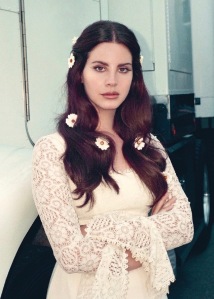 stage. There was also very little talking at all. She mostly just went from song to song with barely any interludes to talk to the audience. One part that stuck out was when she said “Fuck it, it’s good enough” and then went into White Mustang.  Now this is a great song, don’t get me wrong. My only issue with it is that she was relying heavily on the playbacks (this is true for most of her set). If I were there at her concert, I’d want to hear her sing, not just half-ass sing along to a track.

Halfway through her set, Lana seemed to get more comfortable. She sang High By The Beach and Born to Die ; she sounded significantly more relaxed in these pieces. Hell, she even came down from the stage to walk amongst the fans. She sounded more free and organic in her musicality. It reminded me of what I love when I listen to her on vinyl. Another noteworthy part of her concert was Blue Jeans. I was anticipating this song because in the past, Lana’s live performance of this on SNL was so disappointing and honestly made me cringe.

This performance however did not disappoint. She truly redeemed herself from this flop on SNL. It was honestly such a difference in her performance, yet it bring’s me back to the issue of Lana’s vocal’s being a hit or a miss.

There are moments when Lana seems very unsure of herself as a live performer, yet there are some moments when she seems to be very in her element. Maybe this slight awkwardness could be perceived as charming and what sets her apart from other artists. She maintains authenticity through her lyrics, and even to her wardrobe. It’s all about how the audience perceives her and thus far, she has had mostly positive feedback from her fans. Maybe one way she could overcome this awkward stage presence could be to approach as if she was doing a studio performance or music video. By adding a performance art aspect, it could lead to smoother transitions and her not feeling like she’s there to sing in front of thousands of screaming fans, but rather making art become reality. She’d be a storyteller. Her conceptualization of the songs could be a game changer. Or hey, she could just focus on song writing. Either way, I’d still buy her albums and she will continue making amazing music.

In honor of the late Mac Miller, I’ve decided to write this first post about one of his most recent songs, Come Back to Earth. I will be honest: before he died, I knew nothing about him except that he was a rapper and that he dated Ariana Grande for a while. It was only after he died that I saw a flood of fans showing grief online, especially on Twitter. What really sparked my interest in his music is how much his death affected people. In Miller’s later pieces, I definitely get a sense that instead of it being corny trap music that is, as I like

to say, “radio friendly” or about “hoes” and getting money, I’m getting a taste of Mac Miller’s personal life/ struggles. I firmly believe that Come Back to Earth was actually a reflection of his addictive lifestyle, and was a cry out for help.

When first listening to this track, the first thing I immediately noticed was the spacey slow beat of the piano. The piano rolls a lot of notes and gives the sense as though time around Mac is slowing down. It really make me relate this to drugs as a form of escapism and that he was using the music as a way to illustrate what it’s like when he is high. He says in one verse, “In my own way just feel like living some alternate reality.” This line really spoke to me as his way of coping with depression. He doesn’t make the entire song a dark reflection. He does discuss a theme of no longer “drowning” but now “swimming.” Some may believe that this was showing a more positive outlook (Rolling Stone), but I believe it was the numbness from drugs that helped to not feel emotional pain. Swimming doesn’t necessarily mean being emotionally sound. All he is essentially doing is staying afloat. In order to feel free, he could’ve said something about getting out of the water.

Overall, Mac Miller’s music really started to take a dark turn from 2013 on. It seems like his music actually preluded to his death. On a sad, ironic note, the Vulture posted an interview with Mac Miller a day before his death. Miller talked about how he’d want his fans to honor him:

“The people that have the best chance of knowing me, that would like to” the late 26-year-old rapper said, “would just be by listening to my music.” And while his later music developed an alchemy of complicated sorrow and clear-headed descriptions of substance abuse, one does need not look too deep into his catalog to hear the sweetness that characterized the Pittsburgh rapper’s career.

I’m sad I didn’t get to know this artist’s music before he died, but I’m grateful to be able to still have access to his albums, and get to know him through the legacy he left behind. I will be listening to more of his music in the future. In the meanwhile, rest easy Mac.